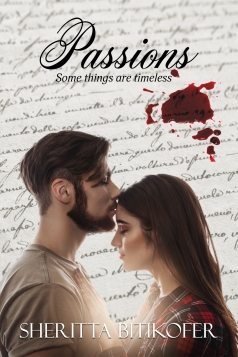 Story Behind the Story

Passions has been a stretch for me because I don’t particularly care for vampires and this will be the only novel I ever write where the main conflict includes a vampire. I have vampires featured in other books, but they aren’t in the lime light like Gavin is.

The inspiration for such a story came from some deep-rooted desire to be a full-time, stay at home writer. That, and I’d love to own a cabin out in the middle of the woods that I could spend the weekends in while I write away from the distractions. Not only that, but I had this creepy scene in my head of a girl sleeping and a man watching over her late at night. But, this wasn’t in a perverted way. He was protecting her as he had always done ever since she was a child. I expanded that idea and wondered “What if this guy was immortal some way, like a vampire, and he knew her because he lived in the attic or basement or something?” And there were planted the seeds that grew into this challenging novel. I hope I have done the two characters justice and not stepped on any toes of vampire lovers out there.