What’s been going on…

So, for those who faithfully follow my blog, you might have noticed that I haven’t posted in a while… Like, almost two months. A lot has been going on, which has restricted me from pouring myself into extra activities like blog updates. So, I’ll do my best to sum up how things are going. 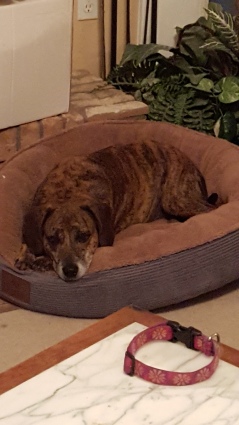 Along with preparing for visiting family (who have since left), our immediately family has been reeling from the loss of a beloved pet. Tammi, our eldest dog, passed away rather suddenly toward the end of June. Through health complications that we aren’t quite certain of, her decline came quickly. She could barely move, refused to eat or drink (which was very unusual) and the docs said there was some sort of infection in her blood, along with possible nerve damage. Three days of worry and panic ended with a call from the vet saying she had passed away in the night before they could really do any other tests or attempts to save her. She was old, so it wasn’t all that surprising, but it was a blow to our household. Tammi might have been one of the more annoying of our two pups, but she was something of a quiet reminder to take things slow and always remember mealtimes. We miss her dearly and though I would have been content to let Sharla (our youngest) become a single-dog, my husband had other ideas. 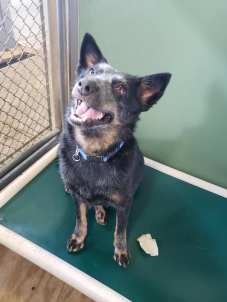 About a week ago, we brought home Evie, a one-year-old Australian Cattle Dog mix. Submissive and quiet in the shelter, she came alive with Sharla in our home. There was some dominance issues, of course, but she’s been a joy to have. Rowdy and active, it’s been hard to find quiet time for me to write. Taken from the same shelter we adopt all of our dogs from, we suspect that Evie might have been an owner-surrender or possibly from a small puppy mill since she was brought with her brother around the same time. He was adopted quickly because of his high energy, but Evie was overlooked for some reason. So far, we know that she loves to play and can figure out the treat puzzle toys pretty quickly as long as she can stay focused on them. She’s still a puppy at heart. 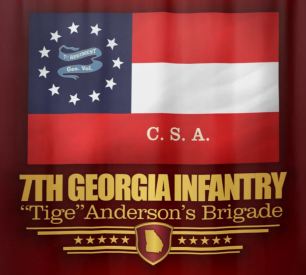 As for writing, I’ve been neck-deep in Civil War research. That’s right! I’m working on Ben Myers’ story. It’s a doozy, filled with immense detail into the life of a Civil War soldier and civilian. I’ve always been interested with this era of American history, but since I’ve had to dig in deeper with this research, I’m realizing this could turn into a passion of mine. I like to call myself an amateur historian at times, given how in-depth I can get with these Legacy novellas, and it’s inspired me to make plans for more historical fiction novels. Nothing I can do right now, but it’s certainly something to consider for the future.

The release of The Convicts, novella #9 of the Legacy Series, will be released very soon. However, I will move heaven and earth to complete The Solder (novella #10) and have it released on September 17th, the 156th anniversary of the battle of Antietam. That same day, I’ll be in Sharpsburg and on the battlefield. Yep! This Florida girl is going to Maryland! I’ll be taking an entire week of vacation to visit places like Jamestown, Richmond, Sharpsburg, Gettysburg, and Chattanooga, stopping in the exact same places my characters walked in the story. Yes, I may have lost my mind, but I’m going to have a blast. One thing to look for once I return that week, is a video of my travels! I’ll be taking short video clips of each place and each marker I visit. I’ll post it here on my blog with pictures and details about the trip that I might have missed in the video. Needless to say, I’m stoked!

So, as you can read, life’s been a little topsy turvy lately and it’s just now slowing down to the point where I can write and relax.

Stay tuned for another blog post regarding book release updates! I’ve got two to share with you!

Sheritta Bitikofer is a lifelong student of history with a specific interest in the Civil War era. Along with being a wife, historical fiction author, and fur-mama of two, she is an active member of the Mobile and Pensacola Civil War Roundtables and currently pursuing a bachelors degree in US History at American Public University. When she's not trekking across a battlefield or has her nose deep in a book, she enjoys coffee dates with her husband and watching her favorite shows.
View all posts by Sheritta Bitikofer →
This entry was posted in Book Updates, General Blogs, Uncategorized and tagged Author Life, Civil War, History buff, Losing a pet, New member of the family, Novella Series, Paranormal historical, Road Trip, The Legacy Series, Updates. Bookmark the permalink.

1 Response to What’s been going on…